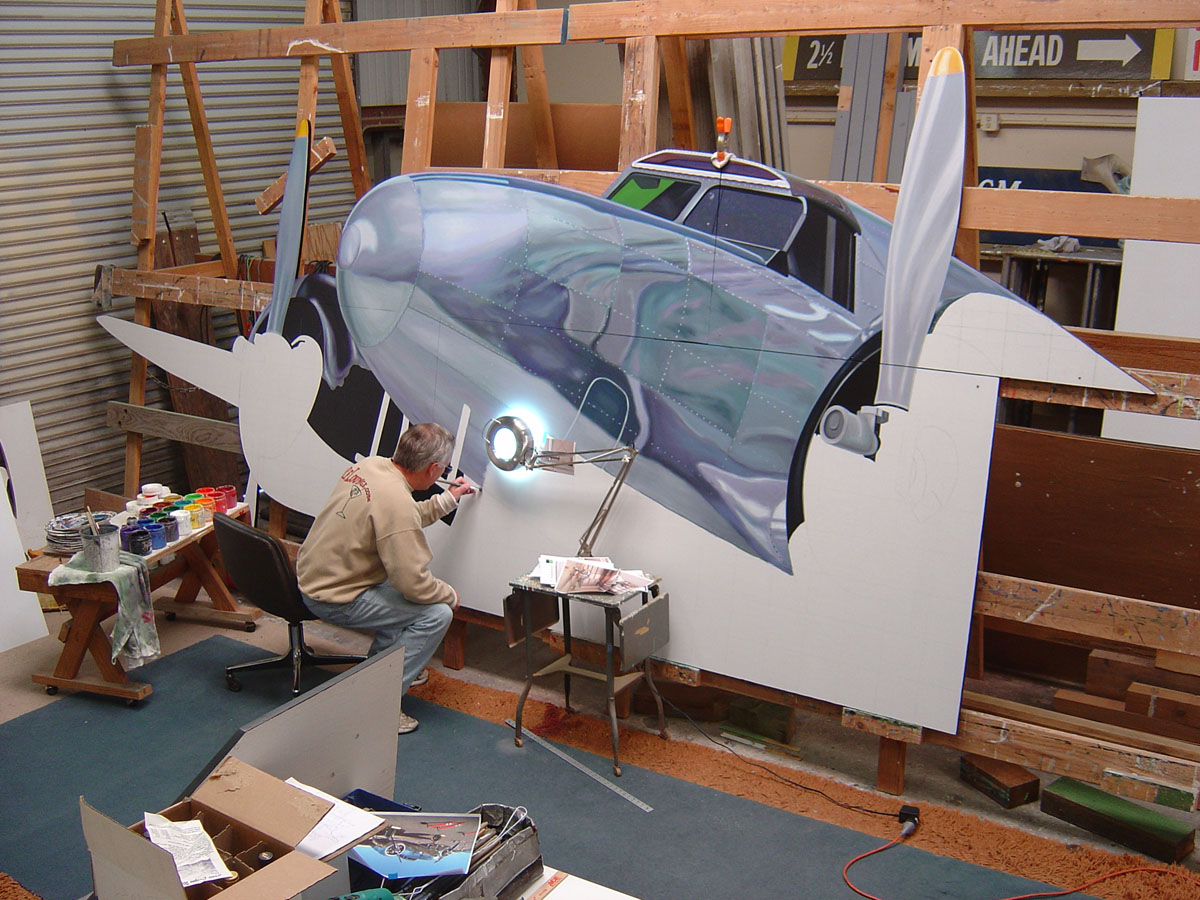 ATCHISON, Kan. (July 5, 2012) — Though it is highly unlikely that one could spend any length of time in Atchison and not quickly learn that it is the birthplace of Amelia Earhart, soon it will be downright impossible to miss that important piece of local history.

On Wednesday, July 18, artist John Cerney will unveil the project he has been researching, constructing and perfecting for the last six months: a highway mural depicting Amelia Earhart, her navigator Fred Noonan and the famed Lockheed Electra aircraft that will sit just south of Atchison on U.S. Hwy 73.

“This is one more Amelia connection — one more thing for tourists to see and enjoy,” said Jacque Pregont, Amelia Earhart Festival Coordinator. “And it’s so different. That’s another reason it is so special. There isn’t anything like it around here.”

The public is invited to attend a grand opening to unveil the work of art at 4 p.m. on July 18. The event has been dubbed “Amelia Comes Home.” Parking will be available at Urban Lawncare, 5537 U.S. Hwy 73.

Wednesday’s event will be the kickoff for the 16th annual Amelia Earhart Festival, which continues through July 21. According to Pregont, having the mural in place in time for the festival is the perfect way to celebrate an important Earhart anniversary: 75 years ago, Earhart and Noonan were lost as they attempted to fly around the world in the Electra.

“We had been talking about trying to do something special for the 75 anniversary of Amelia’s last flight,” she said. “When John called me and I mentioned the anniversary, he said, ‘It’s meant to be!’ It’s a wonderful gift to Atchison.”

For the most part, Cerney’s work of art is truly a gift. He isn’t charging a dime.

“I try to do one project a year that is entirely mine, meaning the concept and execution are all mine, with no commercial aspect to it,” said the Salinas, Calif., artist. “If I didn’t have to make a living with my art, this is what I would do all of the time.”

Though many in the art world would describe Cerney as a muralist, his website suggests another artistic style: “Giant cut-out art.” Rather than using a wall or exterior of a building as his canvas, Cerney creates his own canvas — on a massive scale.

The mural is 38 feet wide and about 11 feet tall. Because it would be impossible to transport at its full size, Cerney breaks the piece into 4-foot by 8-foot plywood sheets. He calculates everything carefully, cuts the outline, and works on four sheets at a time on a giant easel.

He will transport the pieces to Atchison himself, then spend about three days constructing the support structure for the mural from locally purchased lumber. Then he will finally see what it looks like.

“I never see the completed artwork all put together as it is meant to be until I get to the site,” he said. “I actually appreciate the anticipation of how it will look when finally pieced together.”

The idea for the project came to Cerney as he was driving along a highway on his way to install a mural in California.

“I thought that having an airplane sitting along the highway would be an impactful image. But not just any airplane, but a vintage model from the 30s or 40s,” he said.

Having recently read a story about the researchers scouring an island in the Pacific for clues of a possible landing by Earhart, Cerney had his subject. Finding a home for the piece was a different story.

“The toughest part of these personal projects of mine is finding a home for them. Each one of my projects has an interesting story as to how I found them a home,” he said. “‘Amelia Comes Home’ may well have been the easiest.”

Cerney was quickly in touch with the organizers of the Amelia Earhart Festival, who quickly agreed to pay Cerney’s travel expenses and procure supplies for the support structure. Gloria and Corky Jackson donated a piece of land to house the mural and Urban Lawncare filled in the gaps in several areas.

The mural will give Atchison another piece of Amelia Earhart history — and an incredibly unique one at that. And according to Cerney, they won’t be able to miss this one.

“I choose to show them alongside highways because I have a built-in audience,” he said. “I think they have more impact when the viewer isn’t expecting to see art — when their mind is in a tranquil state.”